15 replies to this topic

Has anyone ever seen one of these coconut booby traps?

Are you sure it is a booby trap, it looks more like water container to me.

Are you sure it is a booby trap, it looks more like water container to me.

Yes. That's a grenade sticking out of the top.

I don't believe I have ever heard of such a device.. This is really amazing..

Never seen one, but not surprising either. Coconuts are generally high off the ground. I would guess this may have been placed in a group of innocent coconuts nuts at ground level.

Its just an awesome piece !!!

The following report on Japanese mines on Leyte originally appeared in the February 1945 issue of the Intelligence Bulletin.
[DISCLAIMER: The following text is taken from the U.S. War Department Intelligence Bulletin publication. As with all wartime intelligence information, data may be incomplete or inaccurate. No attempt has been made to update or correct the text. Any views or opinions expressed do not necessarily represent those of the website.]
ENEMY MINES ON LEYTE

First reports from Leyte tell of increased use of land mines by the Japanese defenders.

As had been anticipated from the trend of previous operations, U.S. troops landing on Leyte found that the Japanese had made practical and extensive use of minefields and booby traps in the planned defense of the island.

Preliminary reports indicate that although a decided effort at mining had been attempted, improvised mines were used more often than standard enemy demolitions. Chief of these were aircraft bombs set into the ground with an armed nose fuze exposed as the detonator. A haphazard use of bombs in this manner was encountered before by Sixth Army troops in several Southwest pacific operations.

On Leyte, the principal minefields were found on the air strips at Tacloban and Dulag. Here 63-kilogram aircraft bombs had been planted in groups of three at intervals along the length of the runways—an obvious attempt to destroy aircraft which might try to land on the strip. Bomb mines of this type were planted also on the beach which runs parallel to the nearby Tacloban airfield and which was a logical vehicle route. Near Dulag, armed bombs, which could be detonated by a truck tire brushing against the fuze, were laid on the surface along roads and camouflaged with grass. 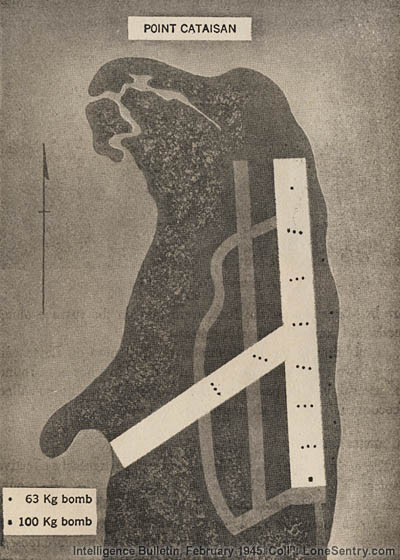 Tacloban air strip. Dots indicate the approximate location of Japanese bomb mines found buried on the runways and the nearby beach.

In addition to the bomb mines, the Japanese on Leyte employed two types of improvised mine that have not been found in general use in past operations. These were the so-called "coconut mine," and an improvised box mine.

The coconut mine was a simple but not particularly effective device. The Japanese had taken a large quantity of coconut shells, hollowed them out, and then filled them with black powder. A Model 91 hand grenade was imbedded in the powder, with only the grenade's 5-second pressure detonator exposed. These makeshift antipersonnel mines were used as pressure detonated booby traps, and were easy to camouflage in natural surroundings. An observer has reported that these improvised demolitions also served the enemy as hand bombs when whirled and thrown at the end of a 3-foot fiber rope. On detonating, they made a terrific explosion, but did little damage.

This is interesting.  My first thought was they were merely trying to disguise the appearance of the grenade.  But apparently by adding black powder into the empty coconut shell they were trying to boost the explosive effect.  Apparently it did not work very well.

To me it looks like a way to make a poor condition grenade worth more. I'm completely skeptical. Without ironclad provenance not something I'd add to my collection

To me it looks like a way to make a poor condition grenade worth more. I'm completely skeptical. Without ironclad provenance not something I'd add to my collection

I agree with the ironclad provenance, but I think that this could be a legitimate booby trap. First of all, it's around 75 years old, so it's not going to look that great today. Second, it's a field modification and not factory made, so it's going to be made with whatever materials were on hand.

I'd only pay the sum of the parts & that's not too much. Otherwise it's a leap of faith

I'm not looking to legitimize it's value as I'm not buying it.

With the hanging wire and such, I wonder if that example is more of a makeshift oil lamp? I'd have to see if the fuse was hollowed out to accept a rope wick. Just a thought.

If you follow the link to the article shown above, you will see a diagram of such a device.

I see the wire in the diagram is folded down and would not interfere with the grenade fuse. Over the years, someone probably lifted it up so it could be hung up to display it.

Back to JPN SWORDS & WEAPONS