Knight Order of the Crown 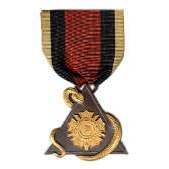 By KevinBeyer,
June 7 in BELGIUM